Kaamil Ansar was inducted as a Fellow of The American College of Commercial Finance Lawyers in April 2018 in Orlando, Florida.

Mr. Ansar was elected as a Regent of the College in August 2021.

Mr. Ansar was elected as a Fellow of the American Bar Foundation in 2020.

Publisher: The Guide was published by the American Bar Association (the ABA) on January 9, 2019, as the world continues to fight the threat of climate change following the signing of the Paris Agreement in December 2015.

Novel features: The Guide provides for the first time in one publication, two essential components of investment in renewable energy:  analysis of the regulatory framework for renewable energy in relevant jurisdictions described below, and analysis of related power purchase agreements.

The Guide by the numbers:

Use of proceeds:  All proceeds from the sale of the Guide go solely to the ABA.

Key objectives:  The overriding objective of the Guide is to build a platform for investment in renewable energy in each of the participating jurisdictions described above.  The wider the audience for the Guide the more likely it is that this objective will be realized. To that extent, Mr. Ansar is fully invested in achieving the Guide’s success.

Mr. Ansar interview with the ABA on the Guide:  see attached.

Purchasing the Guide:  The Guide is available from the Business Law Section of the ABA at www.americanbar.org for about $450/- for non-members of the ABA.

The ABA seeks to serve its members, provides benefits, programs and services which promote members’ professional growth and quality of life.  The ABA has over 400,000 members.

A Guide for Young Lawyers (and Others): Lessons from Professional Sports for the Law Business

The Guide for Young Lawyers by Kaamil Ansar was published on December 16, 2019 by Outskirts Press, Inc.

The premise of the book is that young lawyers (and others) can learn from the experiences of great coaches and athletes—those who have succeeded in intensely competitive professional sports—without learning these lessons the hard way…through personal experience.

The book provides detailed advice on key practice areas and topics that young lawyers or persons considering a career in the law should focus on to get to the next level. 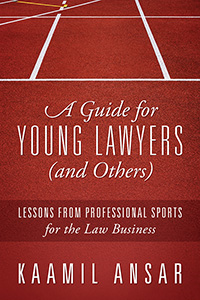 A Guide for Young Lawyers (and Others) offers principles and advice backed up by examples from the world of professional sports, with detailed reading lists and resources to enable the reader to follow-up on and develop his or her skills.

The book addresses the following:

This publication is available from the following website: outskirtspress.com/aguideforyounglawyers and all Amazon, Barnes & Noble, and Apple outlets, retail at $25.95, Apple for iPad at $9.99.

See also the attached press release issued in connection with the launch of the book in December 2019 available here.

Kaamil Ansar produced and directed a film titled "Pakistan Sport – A Winning Tradition" to raise funds for a cancer hospital in Pakistan. The film was broadcast on national network television in Pakistan.